This morning, on my way to work, my train stopped one express station after mine. Some accident had happened on the line and the traffic was stopped for 2-3 hours. No way I could get to work, and once the train would start running again there’d be no bus left to bring me from the station to my office (it sucks working in a factory out in the middle of nowhere).

So I startend to head back home. Trains were out, I decided to give the bus a try: no bus connection from this station back to my home. Taxis? The line in front of the taxi stop climbed back up the stairs all the way to the ticket gates… All that’s left was to hoof it up along the tracks.

It took me 45 minutes to get back home for a 5 minutes ride of express train. On my way I passed by the place of the accident and caught some shots of the train’s broken windshield. There were 5 or 6 TV helicopters circling above.

UPDATE: Jeff, over at JapanProbe.com, fished out the news article related to this accident along with a picture of the K-car that was crushed and the throngs of salarymen walking along the tracks like I did. 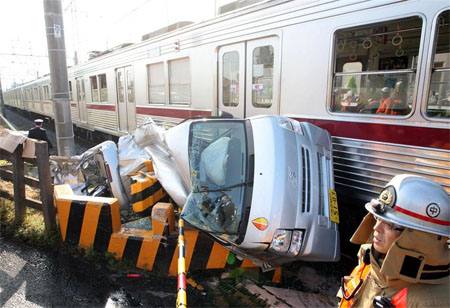 END_OF_DOCUMENT_TOKEN_TO_BE_REPLACED

Last Saturday morning I was leaving a party at 5 A.M. in Shibuya and decided it would be nice to come back home to Shiki with the new Tokyo Metro Fukutoshin line which was opening the very day and interfaces with my usual Tobu Tojo line for an almost direct trip to and from Shibuya (I just have to hop from one side of the platform to another at Wakoushi) in a breeze.

So my girlfriend and I arrived at 5:30 after being guided by cops that were all over the station for the opening and got there to climb in the first train to arrive at Shibuya station and reversing for the journey back to Saitama.

Ruiko said:
Do not under-estimate the Japanese Otaku…

Remembering this saying by a good friend of mine, I wasn’t surprised when that first train came in Shibuya station packed full of weirdos with backpacks and cameras (the classic Otaku costume). They came out of the train clapping and cheering, taking photos of each other in front of the driving cabin and macroing on every little details of the new train and station.

After the flow ebbed, we climbed on the train and were followed by a dozen of guys who must’ve missed the very first train. Losers… One of them was recording the trip and announcements with a microphone, bobbing his head to each of the stations’ distinctive music as if to music from heaven… One of them had long pommeled hair and wore a flowery dress…

I didn’t take any photos of them as my girlfriend was afraid I would get shanked by one of the weirdos like what happened in Akihabara 2 weeks ago, but I do have some photos of the brand new piece of station in Shibuya.