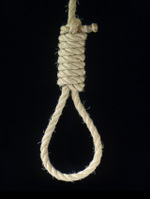 I had the worst dream ever yesterday night. To put it back in context, the rainy season just started here and it’s becoming unbearably hot and humid, 蒸し暑い as they say it here, but I hadn’t turn on my aircon in hope of pushing back the inevitable surge in my electricity spendings.

So the dream started with me killing a colleague of mine around 6 months ago and repressing the memory. But as people around me start asking questions: “Where did he go? No-one heard of him for months?”. Memories begin to rush back. That’s when I woke up tossing and turning in my sweaty sheets.

But the problem when you wake up in the middle of the night because it’s too hot is that you’re still half-asleep. So I couldn’t shake off the dream and as much as I tried telling myself none of it was true, I kept asking myself what if it was real? The police would come sniffing around. Did I hide the body well enough? I should go back to check the grave. But no! The police might already be following me! I’m gonna end up in jail and get the noose!!! (they hang killers in Japan)

I barely slept 2 hours that night. Now I don’t care about the bills, I’m turning on my aircon tonight…