Softbank is launching a fun summer campaign with its cute mascot お父さん:

Use your Softbank 3G phone overseas this summer and get a chance to win one of 100 flower-necklace-wearing-お父さん straps! 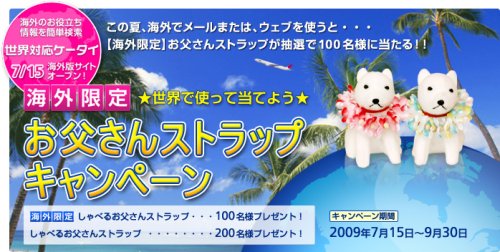 Way to go Softbank! It’s a classy move, trying to lure customers into using their cellphone overseas at ￥200/min and potentially incurring ginormous phone bills, all for a chance of winning a ￥150 keitai-strap…

SOFTBANK MOBILE Corp. today announced it has signed an agreement with Apple® to bring the iPhone™ to Japan later this year.

Why am I so happy? Because my corporate phone is a Softbank, so I should legally be able to change my crappy Sharp phone whose battery cannot hold more than 10min of conversation anymore for a snazzy 3G iPhone and still have my company pay for it. :)

Last week I received a flickr mail from a woman of Nokia Japan who wanted to have me come over to their headquarters to talk about my usage of flickr, my keitai and other web2.0 apps. I wanted to take a day-off from work anyway so I said “why not” and accepted the invitation.

Friday I headed for the Arco Tower in Meguro in early afternoon and had a 1h30 chat with the Nokia girl who happened to come from Hiroshima and be married to a french guy… What a coincidence!

She asked me a lot of questions about my usage of flickr, twitter, wordpress and how I use them to stay in touch with my friends. She took videos of how I use my keitai, and she also showed me some Nokia prototypes which I’m not at liberty to describe, having signed an NDA.

All in all, it was a fun experience.