This blog, as well as all my other personal websites, used to be hosted on servers provided by MacBidouille (which I’m co-founder of). However, sharing a server with other people and services was starting to feel a bit restrictive (I couldn’t easily move from Apache to nginx or support IPv6) so about a year ago I decided to move to my own little VPS box.

I started out with Gandi Cloud VPS and it was fine, but last week I decided to trash that and shop for something better. I chose Linode and I must say I’m very happy.

So for the same price in Yen (thank you super low exchange rates), I get a server with twice the RAM and hosted right next door. Also Linode has a much nicer admin interface (Gandi is pretty messy and slow): 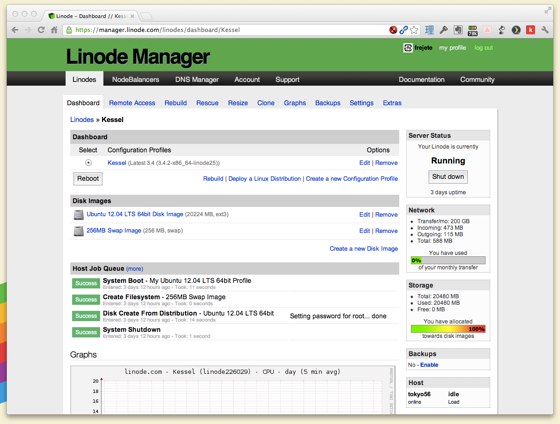 Added advantage of hosting my own server: since I changed job last year, I don’t get to play with linux at work anymore (or any technical stuff actually), so this way I compensate a little bit for my technology withdrawal….

Update: oops! I just realized that Gandi has recently increased the minimum specs of their hosting service, so I could have had a 512MB memory box for the same price since June, making it pretty much equivalent to Linode… Well anyways, the added performance of having the server in a datacenter in Tokyo is invaluable.